What does a high stall converter do? 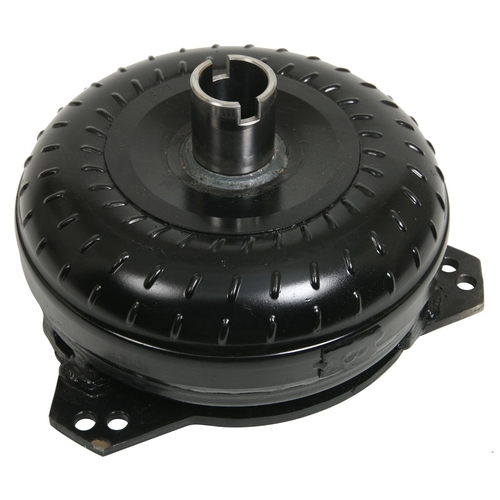 I'll try to keep it short because it's an involved subject. Basically "stall" means when the torque converter "locks-up" under a load. With that, if you take a car with a 2,500 RPM stall converter and you hold your foot on the brake hard, and hit the gas at the same time, (as if you were going to power brake), the "general" RPM in which the tires will break loose is at "about" 2,500 RPM. If the converter was a 3,500 RPM stall, then it would be at approximately 3,500 RPM in which it forces the tires to break loose. Keep in mind, if you put that same converter behind a nasty big block, in a car that has serious traction or is quite heavy, the torque of the engine will drive the stall speed up to a higher RPM, and an engine with less power will have the opposite effect and won't be able to stall the converter out as high. It's all relative to torque, vehicle weight, traction and rear gearing. It isn't an exact science as far as an exact stall RPM goes.

Stock cars have anywhere from 1,000 to 1,400 RPM stalls from the factory. The reason a stall converter works is simple; an engine at 1,200 RPM is only making about 80 or so horsepower (on average), but at 2,500 RPM it could be making 150 to 200 HP, and obviously trying to get a car moving using 150-200 HP is going to be much easier than one trying to launch at 80 HP or so. Most performance engines don't make power until 3,000 or so RPM, hence why when you have a higher horsepower engine with a big cam, you need a higher stall speed so the engine is closer to it's "power band" when taking-off from the line, otherwise it will fall on its face and be a turd off the line.

Some people believe that "stall" means the car won't start moving until the engine reaches that particular RPM, and that isn't even close to being true. Most street performance cars running your typical "performance" cam should be running a stall converter in the 2,800 - 3,000 RPM area. For hotter cars (street / strip) with bigger cams, etc. then a converter in the 3,000 - 3,500 RPM is more suited. For mild performance cars with something like a 350 HP engine, a 2,200 - 2,400 stall is about right. The basic rule of thumb is; if your engine "comes alive" at say, 3,500 RPM, then you want a stall converter with about 3,500 of stall to it.  Most people tend to over cam their cars... and those same people also tend to under stall converter their cars too, which REALLY makes it a complete mess, and want to push through the brakes and surge/buck a lot.

Big thing is matching stall to your cam. If it requires a 3000 stall or 3600 we can not tune a cam to run, idle etc without it. Plain and Simple!

Lot of the this was found in the article below.